We no longer support Internet Explorer 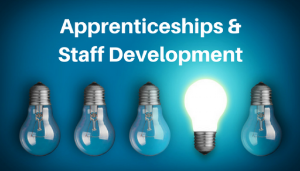 There have been huge amounts of changes to apprenticeships in the last year. Apprenticeship Standards have been introduced which are a new model of delivery. There has also been a change to funding which has seen the launch of the Apprenticeship Levy as well as co-investment for smaller businesses. The changes are exciting. Well, they are exciting if you know about them but not so much if you do not.

Apprenticeship Standards
Apprenticeship Standards are the replacement for apprenticeship frameworks. Frameworks used to be made up of a number of different elements that once completed earned an apprenticeship. Standards are very different. The first point to note is that they have been created by employer groups that have determined the skills, knowledge and behaviours that should be attained to make someone competent in that job role. The second point to note is that to complete a Standard the candidate will have to go through an independent assessment at the end of the programme. Also, Standards are much more flexible in what can be delivered as part of the programme.

New Apprentice Employees
Businesses are still being encouraged to recruit new talent into their companies as apprentices. There is huge value in taking on an apprentice and thousands of companies have benefited from employing apprentices to help grow their team or fill existing vacancies. Notably, businesses are now able to hire a graduate as an apprentice too.

Apprenticeships and Staff Development
The new funding models and the Standards have also made apprenticeships hugely applicable to existing staff. Because of the flexibility offered by the new delivery model, programmes can be tailored to meet the training needs of existing staff who are looking to develop their own skills. There are already a lot of Standards available that cover most industries, with more being published on a weekly basis.

An Example
We are going to use a medium-sized business as an example. The business has a number of teams that perform different functions. The team leaders are a mixture of people that have been in the business for different lengths of time. Some have come through the ranks, some are new and some are due to retire. None of the team leaders has had formal leadership/supervisor training. There are a couple of members of staff that have been identified as possible replacements for the staff due to retire, but they also have had no training.

This is where the Standard for Team Leader/Supervisor comes in. This programme is designed for Supervisors, Team Leaders, Project Officers, Shift Supervisors, Forepeople, and Shift Managers who have responsibilities such as supporting, managing and developing team members, managing projects, planning and monitoring workloads and resources, delivering operational plans, resolving problems, and building relationships internally and externally.

We are using this example as it is something we run for businesses this is if how it works:

Length of programme – 12 months
Cost to the business per candidate – £500
What do they get – Level 3 Diploma in Team Leading / PRINCE 2 / Associate Membership of the Institute of Leadership & Management
How is delivered – Onsite / Online / Mentor Support
It is this type of programme that we think is really valuable to businesses. Unlike other management courses, these are accredited and can be used for progression.

If you would like more information about how apprenticeships can help your business then please contact us and we can talk through options for your business.